Advance your trombone technique with these masterclasses from incredible educators and King artists.

Compliments of your friends at King Brass.

Take your trombone playing to the next level with these King Trombone Artist Masterclass lesson videos. Each course features outstanding musical guidance, techniques and tips, and exemplary performances from the instructors. 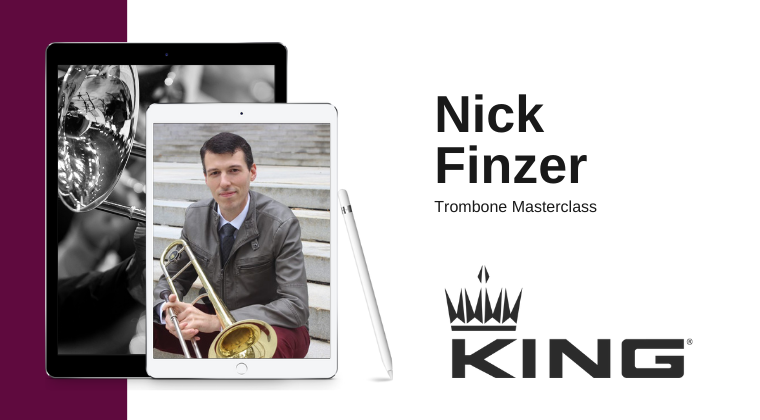 Welcome to the King Masterclass with Nick Finzer 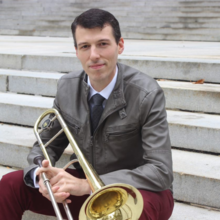 Award winning musician Nick Finzer is a jazz trombonist and composer whose musical prowess is firmly planted with one foot in the past and another leading to the future. In January of 2013 Nick released his recording debut as a bandleader “Exposition” on his new label Outside in Music. “Exposition” presents Finzer’s unique musical lens, featuring ten original compositions that draw on the multifaceted influences that have shaped his musical development. The onset of Nick’s love for jazz came through an exploration of Duke Ellington’s music during his high school years. Duke’s compositions like “Harlem Airshaft” and “In a Sentimental Mood” started him on an irreversible musical journey. These experiences culminated in a performance of Elllington’s music as part of the Essentially Ellington Festival hosted by Jazz at Lincoln Center, which ignited Nick’s ambition to move to New York City to pursue a life in music. During this time Finzer also came under the tutelage of former Jazz at Lincoln Center Trombonist, Wycliffe Gordon. This relationship developed into a four year commission project in which Gordon wrote four pieces to feature Nick during his undergraduate studies at the Eastman School of Music. While studying at Eastman, Nick was able to play with many musicians who came through Rochester, New York including engagements with the Tommy Dorsey Orchestra, Walt Weiskopf, John Clayton and Slide Hampton. Since moving to New York City in 2010, Finzer has completed a Masters Degree from The Juilliard School, shared the stage with the likes of Frank Wess at Dizzy’s Club, Lew Tabackin and Terrell Stafford at The Blue Note, Lewis Nash and Ryan Truesdell’s Gil Evans Project at Jazz Standard, and Nick continues to lead his own bands around the city and across the country. While at Juilliard Nick had the opportunity to work with many mentors including Frank Kimbrough, Carl Allen, Ray Drummond, and studied under jazz trombone innovator, Steve Turre. Nick was selected as a recipient of a 2013 ASCAP Young Jazz Composers award for his composition Alternate Agenda (which appears on “Exposition”). In 2011 Nick was the winner of the Eastern Trombone Workshop’s National Jazz Trombone Competition and was a finalist in the 2010 International Trombone Association’s Carl Fontana Jazz Trombone Competition. Nick currently serves as CoFounder and Artistic Director of the Institute for Creative Music (www.ifcmusic.org), which is dedicated to the education and dissemination of jazz and creative music across the US. In both 2012 and 2013 the IfCM won a “Great Classrooms” grant award from the Plum Creek Foundation funding week long residencies in the state of Montana. Since IfCM’s founding in 2011 Nick has lead workshops, masterclasses, and residencies spanning from coast to coast. Additionally, Nick has worked with students from universities like the Eastman School of Music, Penn State, Ithaca College, Gonzaga University, University of Montana, and Arizona State University, to name a few. He has also served on the faculty of the Eastman Summer Jazz Camp, and Juilliard Jazz Summer Camps in West Palm Beach, Florida and Ephraim, Utah. In New York, Nick maintains an active teaching schedule with the Jazz Standard Discovery Program which includes informational jazz performances/presentations for elementary school students, coaching small ensembles, and weekly performances at Jazz Standard. Nick’s current projects include his sextet featuring music from “Exposition”, a chordless trio that performs monthly at Bar Next Door, a twotrombone duo with fellow Juilliard alumnus Joe McDonough, and freelancing with various ensembles and shows around the city. Nick continues to perform, compose, and teach while maintaining an active touring schedule, and formulating new projects. Finzer is determined to continually develop his artistry from the lineage of the music, while being honest to his musical voice and personality.