Advance your flute playing with these evergreen lesson videos targeting technical playing and artistry, created for you by the outstanding Selmer Flute artists and educators.

Compliments of your friends at Selmer Flutes.

Take your flute playing to the next level with these Selmer Flute Artist Masterclass lesson videos. Each course features outstanding musical guidance, techniques and tips, and exemplary performances from the instructors. 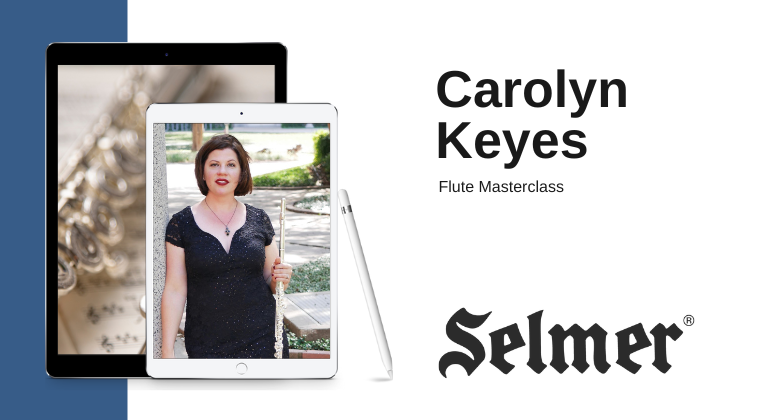 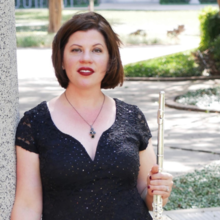 Flutist, educator, and arts advocate Dr. Carolyn Keyes brings infectious creativity and passion to every aspect of her career. From the concert stage to the classroom and the community, she is committed to sharing the wonders of music making with the world. Carolyn’s love of performing has taken her around the United States: most recently to join the faculty of Tarleton State University in Stephenville, Texas. Since moving to back to the Dallas/Ft. Worth area, she has also reunited with guitarist Tim Courtney to form dZuo, an eclectic chamber ensemble specializing in original transcriptions of everything from traditional Japanese music to punk rock. Previously, previously Carolyn was a member of the Longmont Symphony in Colorado, the Lone Star Wind Orchestra in Dallas, Texas, and was a frequent performer with the Cheyenne Symphony in Wyoming. Carolyn was a finalist and prize winner in the Bruce Ekstrand Memorial Competition and received honorable mentions in the National Flute Association Masterclass Competition and the Texas MTNA Woodwind Young Artist Competition. In her teaching practice, Dr. Keyes continually strives to find innovative ways to empower her students. In the spring of 2011, she developed and implemented a class on creativity for the undergraduate flutists at the University of Colorado. She utilized exercises from creative writing and theater, along with original exercises, to help the students hone their creative process. She also organized a “scale relay race” to help her high school students improve their technique while having fun and working in teams. Currently, Dr. Keyes is an adjunct instructor at Tarleton State University. Prior to this year, she taught flute, flute choir, and various academic courses at Cameron University. She has also held positions as a lecturer at the University of Colorado, and as flute faculty at the Dallas School of Music, DanaVMusic, and the Jan Angle Memorial Conservatory. As a recipient of the Priddy Fellowship in Arts Leadership, Carolyn is committed to supporting the arts in schools and the community. In 2014, she served as the administrator for the Longmont Youth Symphony and participated in the Longmont Symphony’s Mentors in Music program, which provides expert instruction to schools in low income districts. Carolyn interned with the Shropshire Music Foundation, a nonprofit organization that teaches music to war torn children in Europe and Africa, where she helped to organize their first annual “Practice for Peace” fundraiser. In 2011 she published an article on the role of imagination and the arts in a democratic education in the independent interdisciplinary journal, Consortium. Carolyn received a Doctorate of Musical Arts in Flute Performance and Pedagogy from the University of Colorado. Her previous studies include a master’s degree from the University of North Texas and bachelor’s degree from Bowling Green State University. Her major teachers include Christina Jennings, Terri Sundberg, Elizabeth McNutt, Leonard Garrison, Nina Assimakopolous, and Judith Bentley. Carolyn continues to study the shakuhachi (Japanese bamboo flute) with David Yudo Sawyer. 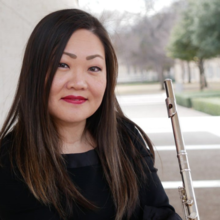 A native Houstonian, flutist Julee Kim Walker remains an active performer and pedagogue in the Dallas-Ft. Worth metroplex. She is Associate Professor of Flute at Texas A&M University-Commerce. Prior to her appointment, she held teaching positions at Southeastern Oklahoma State University, Grayson College, Eastfield College, and the University of North Texas. She received her Bachelor of Music degree from the University of Texas at Austin and her Master’s degree from the San Francisco Conservatory of Music. She received the Doctor of Musical Arts degree from the University of North Texas. Dr. Walker serves on the Board of Directors in the Texas Flute Society as Vice President, and is Artistic Director of the annual Texas Summer Flute Symposium. As a versatile chamber musician, she has performed and recorded with the jazz chamber group, Evan Weiss Project, and with the rock band Oso Closo. Julee has also performed and recorded with the North Texas Wind Symphony under Eugene Corporon, where she can be heard on the Klavier Wind Project, GIA WindWorks and the “Teaching Music through Performance in Band” series from 2005-2009. As a soloist, she has performed with the American Wind Symphony Orchestra, Southeastern Symphonic Winds, Texas A&M University-Commerce Wind Ensemble, Banda Sinfônica de Cubatão in Sao Paulo, Brazil, and with the Dallas Asian Wind Ensemble. She has also performed at the Texas Music Educators Association, Texas Bandmasters Association, and the World Association for Symphonic Bands and Ensembles conventions. Julee has also performed with notable flutists such as Ian Clarke, Amy Porter, and Carol Wincenc. ​ Overseas, she was flutist for the Austrian American Mozart Academy Opera Festival in Salzburg, Austria for 4 seasons, and has also performed as Principal flutist with the Franco-American Vocal Academy Opera Festival in Perigueux, France. Recent engagements include a recital and masterclasses in Shanghai, China in March 2019. ​ An esteemed teacher, Dr. Walker was the 2020 and 2016 recipient of the Paul W. Barrus Distiguished Faculty Award for Teaching, and is highly sought-after as a clinician, adjudicator, teacher and performer. She has. taught masterclasses all over the U.S., as well as in China, Brazil, Italy, Argentina and Chile. ​ As an adjudicator, Dr. Walker has adjudicated for the UIL Texas State Solo and Ensemble Competition, MTNA State and Regional Competition, Sigma Alpha Iota Triennial, the Mid-South Flute Society, Houston Flute Club, the Texas Flute Society’s Myrna Brown Competition and the National Flute Association’s Young Artist Competition and Professional Flute Choir Competition. She serves as an Executive Board Member and Jobs Editor for the National Flute Association. ​ Dr. Walker performs regulary with the Fort Worth Symphony, Sherman Symphony Orchestra, South Arkansas Symphony Orchestra, The Dallas Opera, The Dallas Winds, and with Lyric Stage (Irving), and has also performed with the Dallas Symphony Orchestra, Abilene Philharmonic, Shreveport Symphony, Las Colinas Symphony and Amarillo Symphony Orchestras. She is also a member of FlutAria! professional trio. Her principal teachers include Terri Sundberg, Tim Day, Karl Kraber, Christina Jennings, and September Payne,.