Compliments of your friends at Selmer.

Take your saxophone playing to the next level with these Selmer Saxophone Artist Masterclass lesson videos. Each course features outstanding musical guidance, techniques and tips, and exemplary performances from the instructors. 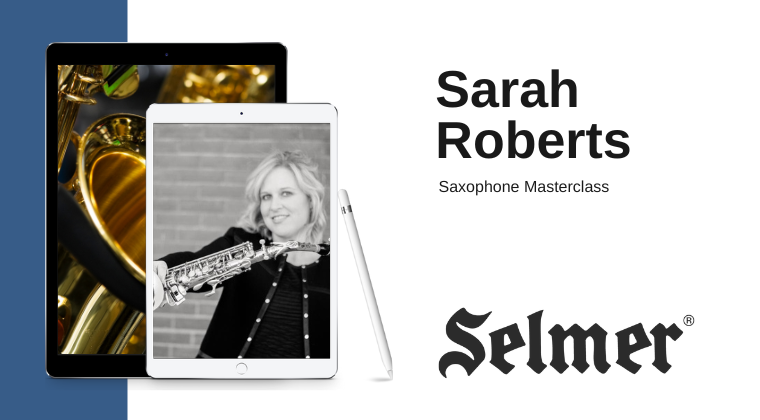 Welcome to the Selmer Masterclass with Sarah Roberts 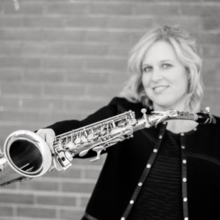 Dr. Sarah Roberts is Assistant Professor of Music at The University of Texas at Tyler teaching Saxophone and Jazz Studies. Her duties at UT Tyler include conducting the UT Tyler Jazz Ensemble, Jazz Combos, teaching jazz improvisation, instructing and maintaining the saxophone studio, and conducting the saxophone ensemble. The UT Tyler Saxophone Ensemble was just selected to be performers at the 2018 Texas Music Educators Association Convention held in San Antonio, Texas. With an extremely diverse background in classical, jazz, and popular music; Dr. Roberts has performed with a gamut of ensembles ranging from traditional saxophone quartets, to new music groups, to rock bands, to jazz groups and all points in between. In the East Texas area, Dr. Roberts frequently performs with her self-titled jazz quartet (Sarah Roberts Quartet) and other local jazz ensembles including The Jazz Connection. In addition, she has been a saxophonist for various orchestras including the Plano Symphony, Irving Symphony, and San Angelo Symphony; has been a substitute saxophonist with the Dallas Wind Symphony, the Lonestar Wind Orchestra, and Allen Philharmonic Winds; and is a member of Kris Berg’s Metroplexity Big Band. Through her performances with the Metroplexity Big Band she has shared the stage with such musicians as Phil Woods, Tom Bones Malone, Wayne Bergeron, Kirk Whalum, Chris Vadala, to name a few. Dr. Roberts has also been a frequent saxophonist for the American R&B group, The O’Jays. Furthermore, she has presented recitals and lectures throughout the United States including presentations at discipline specific conventions for such organizations as the North American Saxophone Alliance and the Jazz Education Network. In January 2018, Dr. Roberts was the featured guest artist for Linn-Mar High School’s Java and Jazz annual event in Marion, Iowa. She has also been the guest artist with the Southeastern Oklahoma State University’s jazz band for their annual jazz festival in 2012; and in 2014 she was the Artist-in-Residence with the Southeast Iowa Symphony. In February 2017, Dr. Roberts was the featured soloist with the Mineola Middle School Band for their TMEA Honor Band Performance where she premiered a work specifically commissioned for the event. In April 2017, she was the featured soloist for the Canton High school Band’s annual gala. In addition, as a member of the Dallas-based Metroplexity Big Band and can be heard on their two albums Time Management and This Time/Last Year. Dr. Roberts can also be heard on the University of North Texas Two O’Clock album, Too Two, several North Texas Wind Ensemble recordings, and Tom Walker’s Gospel Train Big Band album. As an adjudicator, Dr. Roberts is frequently a judge for various festivals and compsitions such as the Frisco Jazz Festival and the Collin College Jazz Festival in addition to other festivals throughout the state of Texas. Furthermore, Dr. Roberts has been the regional clinician for various TMEA and ATSSB all-region jazz festivals throughout Texas and has been the conductor of the TISD all-city band festival. She is also on the faculty of the Texas All-Star Jazz Camp a summer camp held at Collin College and serves as the band conductor for the Green Acres Middle School Band Camp. Throughout the academic year, Dr. Roberts serves as the conductor for the Tyler Community Band. Since 2015, Dr. Roberts has been a member of the East Texas Youth Orchestra board serving first as the University Liason, then as the Secretary and Vice-President of the organization. In Fall 2017, Dr. Roberts created and implemented the ETYO’s first-ever Jazz Academy providing youth in East Texas the opportunity to study and perform America’s music, jazz. The 2017-18 season will be the Jazz Academy’s inaugural season of performances. Furthermore, Dr. Roberts has founded two initiatives at The University of Texas at Tyler aimed at bringing students to campus for high-level instruction and performance. First, she hosts the UT Tyler Saxophone Day each spring that brings over 60 saxophonists to campus for a day of clinics, workshops, and performances with her and several guest artists each year. Students work on all styles of playing and have the opportunity to perform in a mass saxophone ensemble combining all Saxophone Day participants! Second, in September 2015, Dr. Roberts developed and implemented The University of Texas at Tyler All-Region Workshops that have brought hundreds of high school students from across East Texas to campus for a day-long workshop where participants learn strategies for successful preparation of their audition etudes. Currently, Dr. Roberts is serving her professional community as the President of the Texas Jazz Educators Association and is the college representative for Region 21 of the Texas Music Educators Association. Dr. Roberts completed her doctorate of musical arts degree in saxophone performance from the University of North Texas in August 2015. She also holds dual master of music degrees in saxophone performance and jazz studies from the University of North Texas and dual undergraduate degrees in saxophone performance and jazz studies from the University of Michigan. Her primary saxophone teachers include Donald Sinta, Donald Walden, Eric Nestler, and Jim Riggs. Dr. Roberts is a Vandoren Regional Artist and performs exclusively on Selmer and Vandoren products.